This website is dedicated to the proposition that violent criminals should receive no lieniency with to respect to Parole. They should and must serve their complete sentence.
Contact

Contact our organization if you, a friend or loved one has experienced the ordeal of losing someone to crime, or you just wish to know more about us.
Officer
Ron Parker

Read the story of Officer Ron Parker beloved husband and protector of
his community.

Being the victim of a crime is fearful to think about. In fact, I know from first hand    experience just how dreadful it is to have to go through. Regrettably it occurs far to often. Victims  of crime are sometimes young, sometimes old, sometimes poor, but all victims sustain some type  of physical, emotional, or financial injury. All too often, this injury lasts a lifetime.
Your Rights as a Victim or Witness:
​
Being a victim of crime is often a persons first experience with the criminal and the justice system.  As a victim, you have certain rights within the system. For further information regarding these  rights please contact the appropriate law enforcement agency handling your case or your local  victims advocate office.

Who is Eligible?
​
Victims of crime always need the support of their families and friends to help them deal with the  trauma of victimization. Sometimes this support is not sufficient, or additional help or information is  needed. Perhaps, our network of Victims can offer the support or guidance to make your difficult  journey a little easier.


TALLAHASSEE — Ron Parker’s murder shook up St. Augustine 37 years ago, and his widow, Brenda Parker, showed Wednesday that it can still bring her to tears.

Parker would be content to grieve more privately, but she feels compelled to recount the heinous acts that led to the death of her 27-year-old husband in order to keep the killer in prison.

As it has every other time, Parker’s presence at Wednesday morning’s hearing and the simple facts of the 1975 crime were enough to convince the state Parole Board to leave murderer Thomas DeSherlia, 67, in custody.

“He has endangered the lives of many people,” Parker said at the hearing, referring to DeSherlia’s other crimes in addition to killing the former St. Augustine Beach deputy marshal, which is what deputies at the Beach were called then.

“Since he’s been in custody, (DeSherlia) has done nothing to better himself,” she said.

It was a quick and unanimous decision by the three-person parole board, only two of whom vote unless a tiebreaker is needed.

Parker is adamant that she won’t let those who work in the penal system forget about what DeSherlia did to her husband, to her, to their families and to the St. Augustine community. She’s been making her presence felt at parole hearings for 14 years.

It’s still no routine experience for her.

When it was Parker’s turn to speak, she walked to the table in front of the Parole Board and placed a framed photo of her late husband where they could see it. Parker and all the members of her entourage wore buttons with the same photo and the words: “Officer Ron Parker 1947-1975 Murdered-Not Forgotten.”

Surrounded by family — including her sister, Deb Pero of South Carolina, and Ron’s sister, Bonnie Parker Fogle of Georgia — as well as friends and law enforcement supporters, Parker painfully recounted the details of her husband’s death and the impact of it.

Even after all the years and the practice of telling the story and her feelings, Parker still couldn’t make it all the way through without breaking down in tears.

“I always think I’m going to make it (without crying),” she said afterward.

Parker wasn’t the only one who spoke during the allotted 10-minute comment period, but she used the majority of the time and had the most powerful voice.

However, it could not have been lost on the board how devastating the murder was to many people.

Added St. Johns County Commissioner Ron Sanchez, “Ron was a good friend of mine. He (DeSherlia) took a wonderful person away from everybody.”

Among the other people who came to show support for Parker were Herb Greenleaf, former director of corrections with the St. Johns County Sheriff‘s Office; Shelia Greenleaf, a member of the Sheriff’s Office training staff; Undersheriff Joel Bolante; Chris Butler, assistant chief with the Jacksonville Sheriff’s Office; and James Preston and Lonnie Miller, both of the Fraternal Order of Police.

DeSherlia was a suspect in two killings in Alabama and a bank robbery in Iowa when he made his way to St. Augustine in January 1975.

Ron Parker was part of a two-man staff at St. Augustine Beach. He thought he was going to help someone whose car was stuck in some rocks by the pier, but he was instead killed by DeSherlia near the Sheraton Inn on State Road A1A.

DeSherlia led other law enforcement officers on a high-speed chase before he was stopped in the Davis Shores area. He got into a shootout with Deputy Sgt. Wayne Tanner and suffered gunshot wounds from which he later recovered.

DeSherlia was convicted of murder in April 1975 and sentenced to life in prison. There was no death penalty at that time. DeSherlia’s current release date is 2477.

At the parole hearing, only those advocating for DeSherlia’s continued confinement attended.

No one spoke on DeSherlia’s behalf. He was interviewed separately in October and was not present Wednesday, which is standard for parole hearings.

Parker certainly hopes never to cross paths with DeSherlia again, which is why she keeps telling her story.

Now she’ll get a longer reprieve from the parole experience because of a new law that she helped get passed. The next parole hearing for DeSherlia is set for 2019 now that the interval has been changed from five years to seven.

That is some consolation. Parker said she left her home in Gray, Ga., on Tuesday and spent the night in Tallahassee so she could be ready.

The tension of knowing what was coming didn’t make for a restful night.

“It started building from the time we left Georgia,” Parker said.

Parker remains confident that she’s doing the right thing despite the emotional toll it takes.

“I’m always afraid (parole will be granted),” she said. 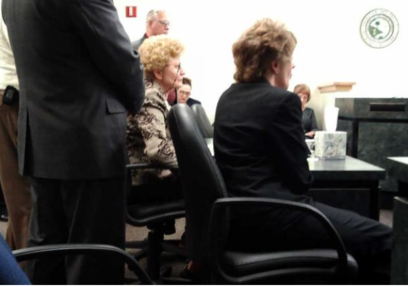