in memory of
Officer Ron Parker​

A Truly Beautiful Song.
To hear this truly amazing song click on the play button below. 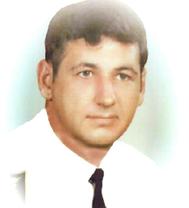 On January 12, 1975, Deputy Beach Marshal Ron Parker was dispatched to an accident near St. Augustine Beach Pier.  He located the driver and asked for his identification.  Officer Parker requested the driver follow him to the police vehicle.  He was directed to the passenger side, but fumbled with the car door.  The suspect opened the door and fired a .45 caliber automatic at Officer Parker striking him twice in the neck.   The murderer, Thomas DeSherlia, did leave the scene on foot, but returned threatening bystanders away.  He pushed Officer Parker's body from the patrol car and took off in the vehicle.  Ron's body was dragged many feet before releasing.  A shoot out ensued with pursuing Officer Wayne Tanner.  DeSherlia was shot and apprehended.  The murderer was a federal fugitive in flight of a bank robbery in Iowa and kidnapping and double murder gang land style of a husband and wife security team in Alabama.  In 1975 there was a moratorium on the death penalty.  DeSherlia plead guilty and was sentenced to 25 years to life.

This was the end of life as I had known it.  February 22 we would have celebrated our 10th Anniversary.   We had been High School sweethearts since we were 14.  That terrible knock at the door came that night.  I was not allowed to go to the scene or hospital to say goodbye or to touch his sweet face.  The first time I saw him was after the autopsy.  The first experience with funerals was my Ronnie's.

I fought the only way I knew, I worked and busied myself through the days and weeks and years that followed.  I guess you would say I stuffed all those feelings I should have felt and kept going.  It was eight years before I was able to deal with emotion of Ronnie's loss; it was 25 years before I was able to express the anger.   For those that say you will get over the loss, I can honestly say you have no idea what you are talking about.  There is no getting to the other side of grief, for it may change, but it remains.

In 1998, DeSherlia had served 23 years and began the process of his first parole hearing to set a tentative parole release date.  The release date has to be set initially and a request to the intervals of parole hearings.  The fact that there was a firearm involved gave us the opportunity to request that the hearings be every five years rather than 18 month intervals.  A course of action was set to contact all the people that we had known years ago.  Old friends and acquaintances, people of law enforcement, organizations that could sway the parole board's thoughts.  Hundreds of petitions with thousands of people's signatures sending the board their outcry to protect our streets by keeping DeSherlia incarcerated for his life.  We were successful to keep the murderer incarcerated with a tentative release date of 2476.  In 2003 we were able to add an additional 6 months to change the release date to 2477.   The year 2008 there was no change of release date.   We continue to go through this process every five years, reliving over, over and over again the tragedy of Ron's death.  We continue to open our hearts and emotions, retelling Ron's tragedy, defending our Ron and condemning his murderer and we hope protecting our society from his release.  It is because of this continuous process that I have worked toward extending the time between parole hearings intervals by petitioning the Florida House and Senate to write a bills to that effect. In 2010 we reached another milestone. Still our work is not done. I wish to have new bills in both the Senate and House of Representatives that would either extend parole hearings to every 10 years and once a felon has 3 strikes there will be no chance of parole and no hearings.

Please help us push these bills through as they arise so they may become law - contact your respective representatives today.

It was 1998, while searching organizations that might help me during the parole process, when l first became aware of a national organization of Concerns of Police Survivors.  It is an organization that support survivors of police officers killed in the line of duty.  The assistance they gave me during the parole process is only one way they help survivors get through after the loss of their officer.  The organization was not established until 1984, so they were not in existence when Ron was killed.  How much easier it might have been for myself and Ron's family if we could have had Nat'l C.O.P.S. in our
​life at the time of Ron's loss.  For most survivors they are there to help at the time of loss.  They provide assistance immediately with grief counseling, seminars, retreats, scholarships and an offer of ongoing support for as long as we need them.  I was so taken with the support that I received that when my hearing was complete, that I  decided to work within the organization.  I have been serving with the board of Ga.C.O.P.S. ever since.  The most rewarding and healing experience that I have received in my involvement is that I can give a helping hand to others.  Ron is known by name and has a place at the ​table within our organization of​ Nat'l C.O.P.S. Our resolve and combined efforts of many like minded individuals, the interval for parole hears is now 7 years.
Deputy Beach Marshal
Ron Parker
Born: Jun  7, 1947
Murdered: Jan 12, 1975